Some people are fanatical about sports and other people couldn't care less.  Before I married Dh, I would definitely have said that I did not understand the sports frenzy.  I grew up in a home where sports were almost invisible.  Dad's family, when he was growing up, consisted of four boys and a father who was obsessed with sports.  There was tremendous pressure on all of them to achieve (and they did, dad's eldest brother went on to a major U.S. university on a track scholarship) and for dad, sports came to represent all the things that he didn't like about his father (who was a very hard man as a father, although he seemed to discover his heart when his grandchildren arrived) and the family dynamic.  Dad embraced theatre and music and hated anything to do with sports.

Then, Dh came into my life.  He is English and grew up with a father who was an avid soccer fan.  They hated hockey and hockey culture (I'm with them on that, no offense to anyone) but soccer was a connection to where they came from and the family far away.  In the years before all the digital channels, it was a rare thing for them to get to watch the E.P.L. and when they did, it was a treat.  Dh has taught me to really love the game and what it represents to our family.  Here are my reasons for why it's "the beautiful game."

1.  It's a connection for Dh and my kids to where their family comes from.  It's a way of identifying with the family in England and the culture that they come from.  For me, it's a glimpse into Dh's past and his family. 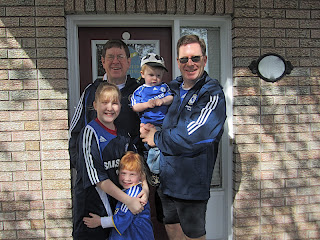 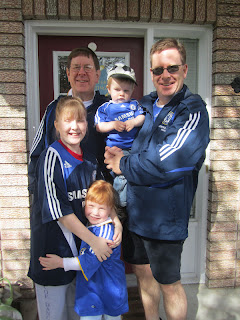 2.  It's something that we can do as a family, whether it's wearing our jerseys together, going to Pk's soccer practice and game on Wednesdays or my parents-in-law coming down to watch the big game.  It's not an activity that belongs to a few of us, we can all be involved. 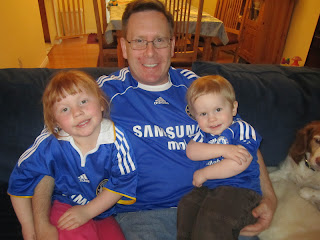 3.  It's an "every man's" game.  While you can spend thousands if you want to, all you need is a ball and a pair of shoes (and even they don't need to be official).  I love watching some of our favourite players knowing that they come from third world countries and have been able to make it to the top.

4.  It brings back so many memories with my kids.  With Pk, it was Dh walking her in figure-eights in our rec room when she hit her colic times every evening.  They walked miles while he watched the game and comforted her while I stressed about what was wrong.  LB was born at the beginning of the World Cup and the nurses referred to our room as "the hive" since we watched every game in our room and the sound of the vuvuzelas created a constant drone in the room.   When we returned home from the hospital, Dh set up the cable and a t.v. in the bedroom and for our babymoon, LB and I spent a great deal of time nursing and dozing and watching the World Cup. 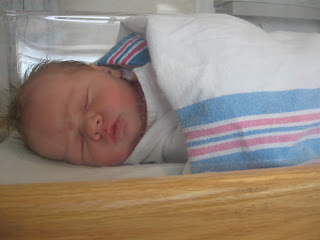 5.  It's a really exciting, athletic game.  Some sports involve a lot of standing around or strength without necessarily the stamina.  Dh loves to tell of an "ultimate athlete" competition he heard about that has been won by a soccer player year after year when in competition with athletes from other sports.  Running for 90 minutes straight with very little rest time and a clock that keeps running makes for a very exhausting game.

6.  Soccer is a very exciting game.  Unlike some sports, the score stays low and every goal counts.  The games are often very, very close and one game matters... finals are not best of seven, they are based on one game.  That makes it very intense! 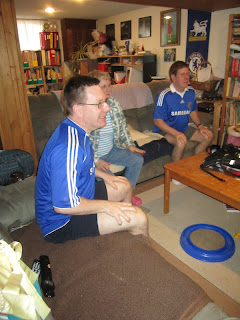 7.  It's  a game that kids can get into early.  Most of our town plays and it's a very reasonable price compared to other sports.  Most of the kids in our town play and it doesn't seem to matter whether they are especially athletic or not.  Lots of Pk's friends play and we get to visit with many of our local friends every week. 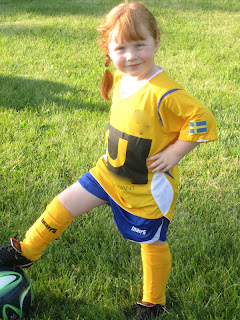 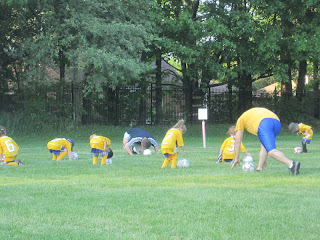 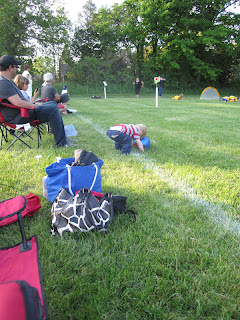 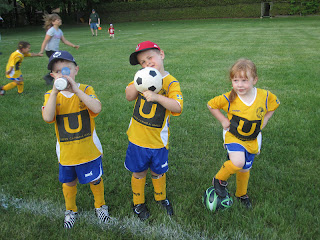 8.  Pk's daddy is her coach and I think it's wonderful that she can share this experience with him.  I suppose that any sport can be like that but with this, there isn't a real separation between coach and players like there is in some sports.  He's putting in a lot of time with her and she knows it. 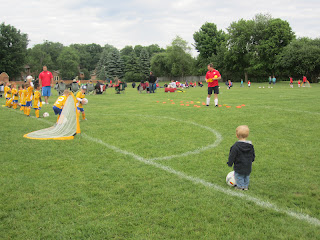 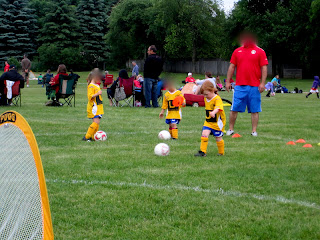 9.  Best of all, we don't have to worry much about anyone getting hurt.  Several of the most popular sports these days have alarming rates of head and neck injuries and with soccer, while injuries are not impossible, they are much less common, especially life-threatening ones.

I'm off to watch Portugal play Germany.  Dh and I will be busy until the Euro tournament is over (and, I might add, my FATHER, of all people, is now hooked and supports the Netherlands).  Go, England!
Posted by pippasmum at 5:16 PM No comments:

There are three things that have been taking up my time lately (and why I haven't written here at all, checked Reader or done any knitting at all) - marking to get ready for report cards, getting set for LB's party (we are doing a soccer theme and it's been so much fun to plan so far!) and endless family birthdays.  I had a P.A. Day for report writing today and got them 99% done and school should be done in three weeks so once LB's party is done, life should get back to normal.  June is always so crazy!

One thing that I have managed to find some time for is the garden.  You don't see all that many photos of it here but it is an endless job.  We have a side yard for the kids with a rose and some flowers I have planted (and a vast collection of dandelions which had to be pulled), a front yard with three beds and a yard on the north side with my rose bed and our veggie garden.  Add on a whole lot of brick patio space (which was added by the previous owner) that seems to constantly need weeding and the gardens could take up all of our time.  There's also a back stretch but we've turned that over to the dogs so other than a little corner Dh uses for growing beans, it's allowed to basically run wild.

A number of my favourites are getting ready to offer their beauty.  It's funny but I have several flowers that always seem to open on my birthday.  It is probably a fluke but it always seems like a special kind of gift!

Anyway, here is where we are at.  In this bed, the hydrangea is still small but I definitely see new growth underneath and it gives a nice splash of colour.  The hostas have gone crazy, which is nice - I want to create a shade bed in the side yard next year and I plan to separate these and use them there. 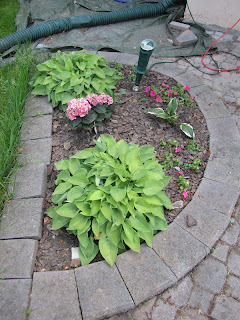 This is my birthday poppy.  It isn't the colour I would have chosen but it's so dramatic and it always opens its first bloom on my birthday.  This year, it was a day early but between Monday and now, we have gone from one bloom to 20!  The best part?  I bought it for 10 cents 9 years ago.  It looked almost dead and had been discounted several times until it was 10 cents.  At the time, I thought, what could I lose?  Apparently not very much :-) 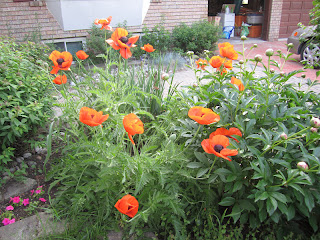 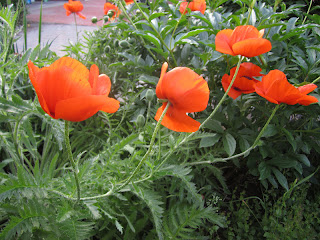 These are my peonies, which are almost ready.  It's strange because everyone else in town has them open and already looking tired.  These ones are a lovely light pink and I think they are one of my favourite cutting flowers.  The only problem with them is that I always find that just after they open, we get a hard rain and then they all tip over.  I've got so many, I will definitely get out there and get cutting before they have a chance to tip over and there will still be some left outside. 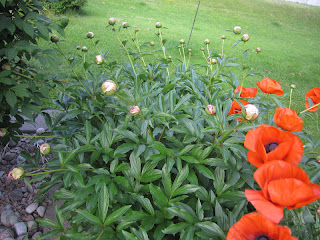 This is my David Austin Heritage rose.  I adore this rose.  It has lovely light pink blossoms with so many petals it looks almost like a peony and they have the loveliest lemony-rose smell.  It seems to be very, very happy with the unusually warm spring we have had and it is covered in buds.  It blooms all summer and I cut from it weekly.  I can't wait to see flowers emerge! 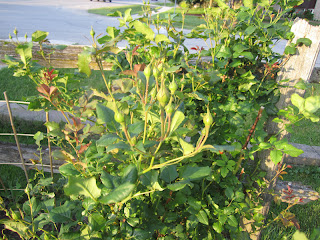 That's it for now.  The morning glories and sweet peas that I planted from seed (something I have always meant to do but this year, I finally got around to it) are thriving but not yet blooming.  I'll share when they are ready.
Posted by pippasmum at 6:25 PM 1 comment: