So often, I use my blog when I feel a need to vent and I don't have anyone to listen (or I don't want to subject anyone to my frustration).  I thought it was time to share that I am not always a grumpy, frustrated and judgement person (my mom says that when she dies, I am to burn her journals since she only writes when she is angry or upset and we will get a skewed picture of who she really was - it appears that runs in the family!

This past weekend was Thanksgiving here and it has this funny tradition of often being the nicest weekend of the year (in my opinion).  This year did not disappoint.  The weather was warm, breezy and the sky was that stunning shade of blue that one only sees in the fall.

Thanks to having to walk my dogs (one of the best things about having hunting dogs - they NEED to run and when you are going to walk anyway, you might as well go somewhere nice), I had a chance to see autumn in all of its glory. 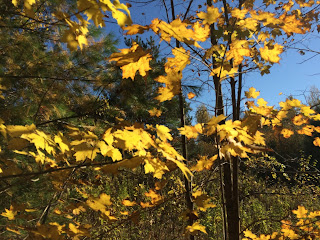 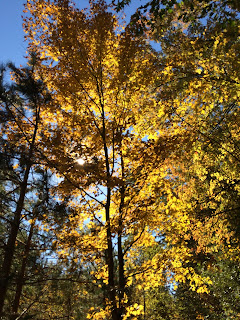 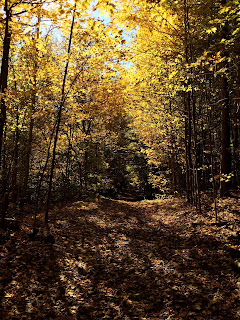 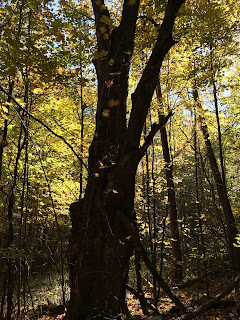 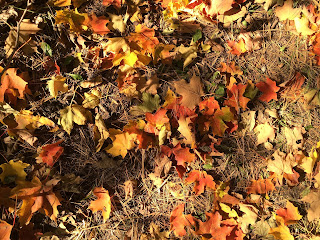 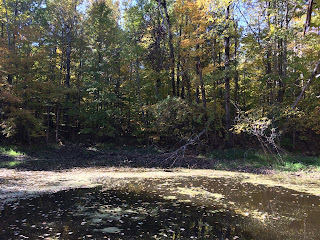 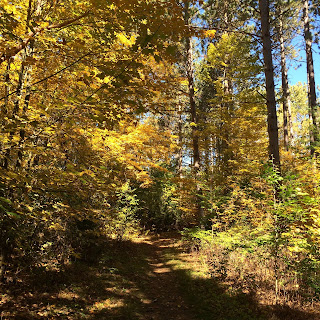 I've been slowly reading An Altar in the World by Barbara Brown Taylor and both the chapter on Attentiveness and Groundedness reminded me of the importance of truly seeing the beauty in creation.  For me, at least, it's so true - being outside in the lovely places serves to remind me almost better than anything else, how truly blessed I am.  If anything, it's humbling - I kept feeling overwhelmed that I am allowed to live in this area with horses and farms within walking distance of my house and a huge maze of forests around us that are all within about a 7 - 10 minute drive from home.  Best of all, it's safe here to walk alone and I am very aware that for many people, they can't venture away from home without needing to be hyper-vigilant and to feel unsafe.  I walked an hour in the forest with just my dogs (who would be useless against trouble, I think, unless it was a squirrel or a raccoon) and when I did encounter people, they were just fellow walkers like me, who had a smile, a "Happy Thanksgiving" and then just continued on their way.

We also had so much time this weekend to enjoy each other.  We saw friends, we visited family and, most of all, Dh and I and the kidlets were able to just "be" together.  I can't say how lucky I am and how much I enjoy my family most of the time.  I feel so lucky to have two healthy, happy children and to have the privilege to try to craft a childhood for them.  Having little people truly does allow one to see the world through different ideas, with a lense of awe and excitement and to appreciate the little blessings, such as a rope hanging from the tree or a pile of leaves or a magical tree. 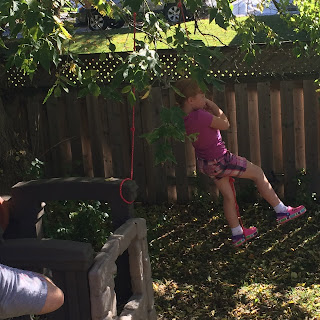 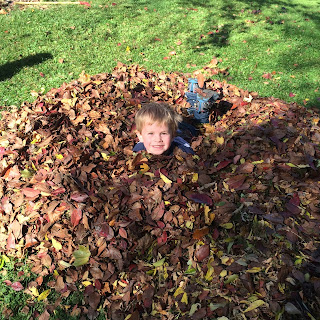 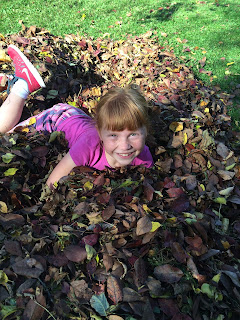 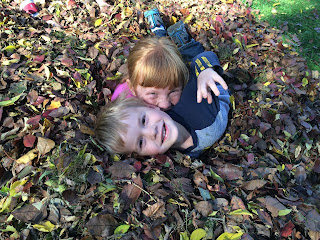 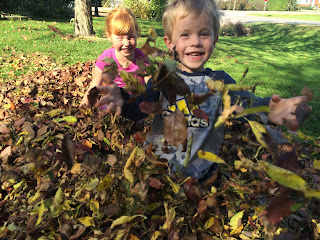 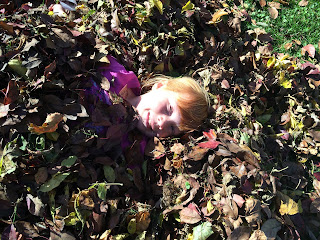 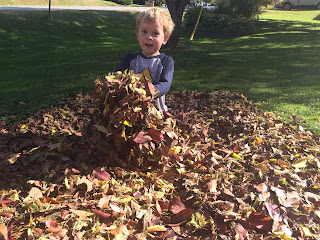 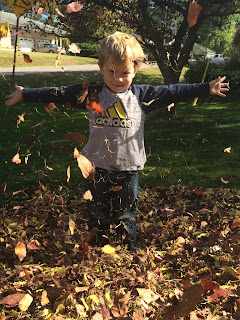 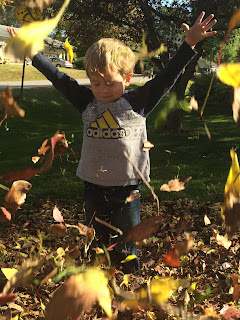 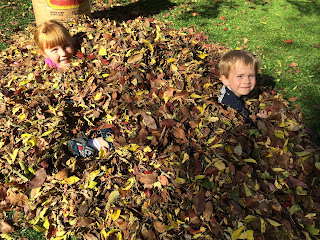 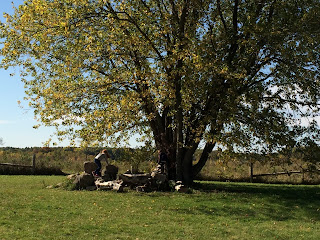 This weekend served as such a reminder to me that I need these slower times to remind myself that no matter how awful things may be that are happening in the greater world, there are so many blessings for which to say thank you.

Posted by pippasmum at 7:08 PM No comments:

Crushed Under the Weight

It’s really unsettling and depressing to discover that the world I thought was my home is not at all like I had understood it to be.  Yes, I am naive and I do tend to give people the benefit of the doubt (Dh has accused me, for years, of putting up with garbage from people and making excuses because they have had issues and he is probably right).  I generally assume that, unless someone has been really damaged by something in life, that he or she is capable of compassion, empathy and understands that others have needs and rights as well.  I’ve learned that I am wrong.

I’m a Canadian.  I grew up believing the myth that we are the kinder, gentler version of our American neighbours.  I thought of us as the world’s peacekeepers – trying to help third world countries, having national health care and having a welfare system that, while not perfect, at least attempted to be sure that everyone’s basic needs were met.

In the last several years, I have seen glimpses that all is not what I had believed.  First Nations people were homeless on their reserves, living in desperate poverty, driven out of their homes by toxic mold, if they had homes, and dealing with a lack of just about everything (while also coping with the legacy of the unbelieveable cruelty enacted upon them in our residential school system).  I listened to stories being told at the hearings of the Truth and Reconciliation Commission that made me nauseas and that made me ache to reach out to these victimized native children.  Then, I heard that the government had “saved” millions and was balancing the budget, in part by not spending the money allocated to our native peoples.

I stopped hearing about Canadian outreach in struggling nations and began to hear grumblings against refugees.  I was stunned when, earlier this fall, I began to hear talk that we were refusing to take Syrian refugees because they “might” be terrorists.  What happened to the Canada that stepped to the front of the line in helping the Vietnamese Boat people?  Other than the First Nations peoples in Canada, we are a country of immigrants – how could people forget that most of our ancestors arrived here as a result of some kind of crisis?  This was a refuge for them, why weren’t we willing to act as a refuge for others?  I saw the images of Syrian families stranded in various places in Europe, mothers with young children with no shelter, little food, no belongings after a harrowing journey across dangerous waters in unstable rafts.  I couldn’t imagine what circumstances would make me put my children at such risk and I couldn’t understand where our compassion had gone.

Then, finally, the rhetoric began to spew out in our election campaign.  I began to see online the truly offensive Islamophobia spilling out.  I heard stories of pregnant women being assaulted for wearing a hijab, of Muslim women being verbally abused and told to “go home.”  I began to see posts on Facebook from people I thought were much more compassionate arguing that these Muslims were trying to “take” “our” country and that there is no room for them here.  I couldn’t see how people were unable to see that if Muslim acts of piety and worship were unwelcome here, it would only be a matter of time before my Christian faith would become unwelcome, as well.

I have felt almost crushed by this.  I see that the party that is pushing this agenda is now leading in the polls and I am terrified for what this means for our country.  I am so tired of fighting and calling racism where it is rearing its ugly head.  I hate the conflict and I am struggling to find a way to “love my neighbor” even when he or she is spewing hate towards people who are already victims.  I don’t know anymore whether it is time to be quiet and stop the conflict or whether that is just continuing the pattern that was so evident in Nazi Germany – “it’s not me and it’s not my problem”.  I am seeing so many parallels and yet, there are so many people caught in this mass hysteria that I am becoming afraid to speak.  I don’t want to go to church because I know that some of the people in that church on Sunday morning hold these views and I am waiting for them to turn on me, too.  I debate leaving Facebook entirely because I find this all so upsetting but I also worry that if we stop calling this what it is, that it will only become more socially acceptable to hold and express these views.  I am confused and tired and mostly, just SAD.
Posted by pippasmum at 7:06 PM No comments: