I've been trying very hard this week for look for those lovely moments and unlike some weeks, this week has been very easy.  P.K. was asked to help out at the barn where she rides and so she was happily dirty, with hay in her hair and a layer of dust all over her and the smell of horses all week.  She loves nothing more than being around the horses and at 8, almost 9, she was so proud to be able to work.  It also gave me a chance for some time with Little Man and that was wonderful, too.  We don't get that anywhere near as often as I would like and it was such fun.

This was truly the week of the park.  Sunday, as the wrap up to a very busy week of VBS, instead of our normal service, we had brunch and then, we were invited to do a prayer walk around town - to spread out in small groups and to pray at various sites to cover the town in prayer.  To someone who isn't a Christian or who hasn't done it before, it is oddly powerful to stand in the schoolyard at your child's school and to pray a blessing over all of the children who will attend.  To make it more meaningful for the kids, we decided to visit several parks (although I only took a few photos).  Our deal was that we would pray over the park together and then, the kids were allowed a short play.  It was lovely and it also reminded me (and the kids) of some of the things that we would like do before the end of the summer while we still have the time. While our town is small, it provides us with many wonderful opportunities, especially for the kids. 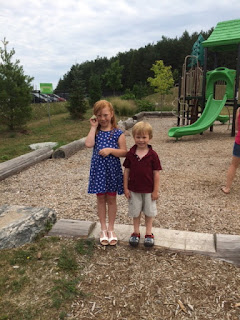 Park 2, which is also the schoolyard 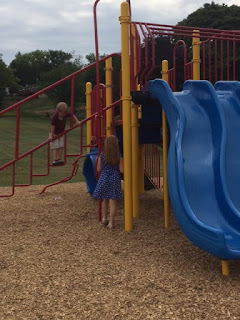 While I hadn't actually planned it this way, while P.K. was at the barn, Little Man and I did a tour of wading pools and splashpads.  On Monday, we went down to the city and visited my parents.  There is a wading pool at the end of their street and, I think, because splashpads are the "in" thing now (no need for lifeguards or chemicals), to go to a wading pool is a special treat.  Visiting these pools is so nostalgic for me because they are the same pools I enjoyed when I was a child.  Little Man loved every second.  On Wednesday, we visited the splashpad by the school at which I teach (and I was able to see a few special students, which made me very happy), on Thursday, we met up with a few former colleagues, who are also good friends, at another splashpad/park and on Friday, we met up with one of his friends from school and his mom (who, it turns out, is quite a kindred spirit - what a bonus). 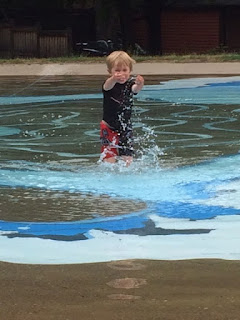 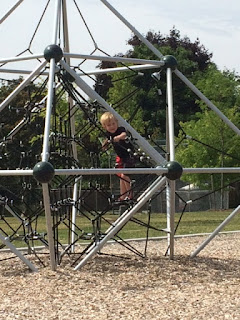 On the walk back from the splashpad on Friday, we came home through my favourite place in our town, the trail that ends up at a park.  It's such a lovely walk - years ago, when I used to walk at 5 a.m. with Chelsea, my special dog, that was the home of my fox family and even before that, I used to visit the creek after work when I needed to decompress.  I'm not a believer in fairies but for me, if there is an enchanted place in town, this would be it.  Just the sound of the water lowers my stress level.  The kidlets love it, too, and it reminded Little Man of a time when we had made paper boats and tried to float them on the creek a couple of years ago.  He was insistent that we needed to do that again and we agreed that we would wait for Saturday so that P.K. could come along. 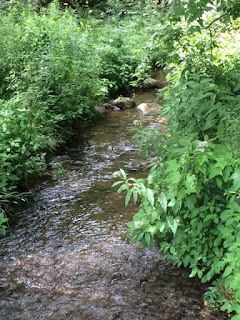 It was another opportunity for a "down memory lane."  There are two paths and the kids have always loved "the mountain path" and it was tradition for us to sing, "The Bear Went Over the Mountain" each time we went up the hill.  I was a bit surprised when Little Man asked us to sing again and instead of whining about it being "baby-ish", P.K. thought it was a brilliant idea.  That, for me, will always be such a treasured memory! 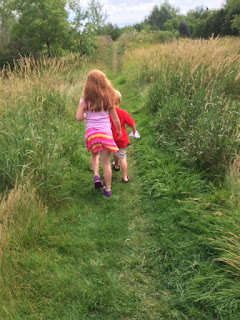 The wildflowers were out in full bloom, which explains my allergies but also made for a lovely walk. 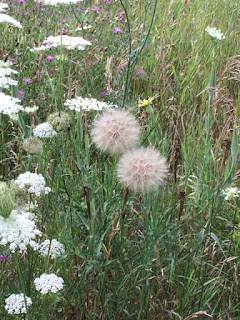 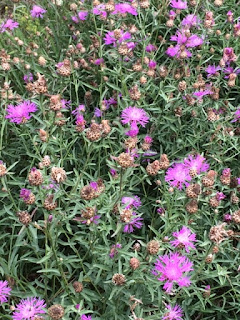 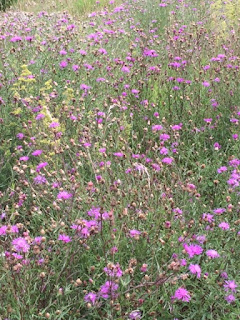 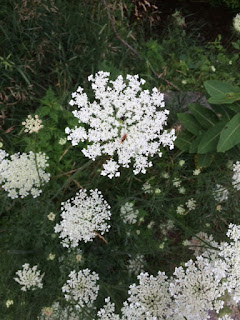 I may be slightly insane but of late, I have been trying very hard to avoid saying no unless there is a real need.  I have always been worried about the kids falling into the water but this time, I agreed that, if they wore their Crocs, they could actually go into the creek to float their boats.  I think this will rank high on their list of fun summer memories.  I can't express how much fun they had and I couldn't help but think that these kinds of experiences are what childhood is truly about. 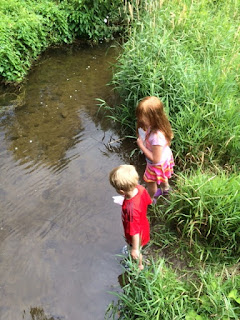 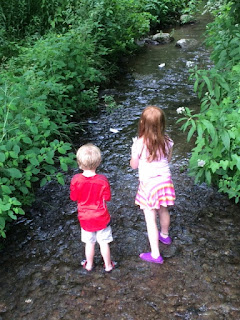 The other magical part of this week actually did involve faires, not just a sense of enchantment.  My mother has bought a couple of fairy houses for her garden.  P.K. had mentioned that she "didn't believe in magic anymore" and for my mom, who values imagination so much, this made her sad.  Mom has made it her mission to recapture some of that love of childhood magic and I was a bit surprised to see that it had taken more than I had thought.  A small store in town that sells an odd assortment of gift things is closing (under sad circumstances) and was having a liquidation sale and I decided that we would wander up.  The kids some some garden fairy figures and given that they were less than $5 each, I broken down and bought a few.  Before we knew it, the kids were spending almost 3 hours designing a fairy garden out back and then, we ended up driving to the dollar store to buy wooden houses for the kids to paint for their fairies.  I love watching my children when they have a project and it made my mom so happy to see what the kids were up to.  I have a feeling that this love of fairies has taken and may define our play for a while.  I am hoping to track down some good fairy stories for us to read in the next few weeks to build some more fun memories. 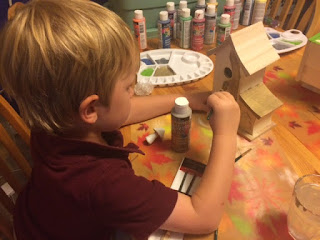 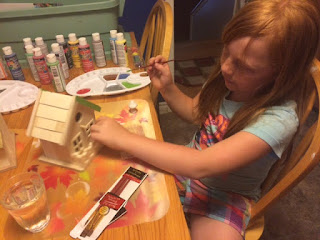 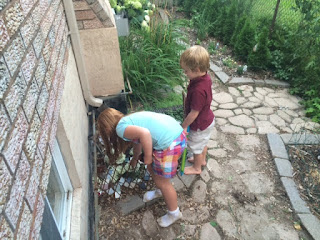 Posted by pippasmum at 8:07 PM