Ack!  I just looked at Ginny's blog to link up and the Yarn Along is no more.  I can completely understand why she has made that decision but it makes me sad, too.  I'll have to find some other blogs to read and start trying to make some new connections around the blog-sphere! 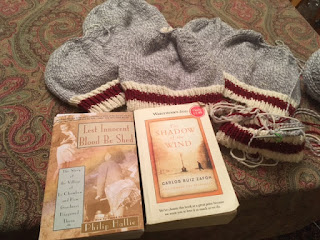 I haven't been around much lately for the Yarn Along but I really wanted to get back in the habit.  Life has been crazy and things like knitting and reading haven't been getting the priority they should in terms of finding a little bit of time for myself at the end of the day.  Thank you to Ginny who hosts the Yarn Along over at her beautiful blog and thanks to everyone who shares.  My to-read list gets longer and longer and I have so many patterns waiting to be made!

On my needles, I have made several more of the ponytail hats.  If you don't already know, Pk's skating coach asked me back in March if I could make some kind of ponytail hat in a "worksock" pattern.  I found one on Ravelry and after a few modifications (I don't know why, following the pattern the first one ended up being the right size for an infant), I came up with a hat that I love.  I got a LOT of requests for them and when I worked on them at school (I am one of the leaders of our school knitting club and when our knitters don't need help, I do some of my own), the girls would rave about my "Roots Hats."  We had talked about trying to get some gear for the synchro skating team Pk is on so I thought I would make a set of hats for them for next fall.  I think there will be 12 skaters so I am aiming for 14 hats, just to be on the safe side.  I've got five done so far. 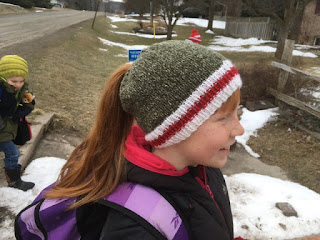 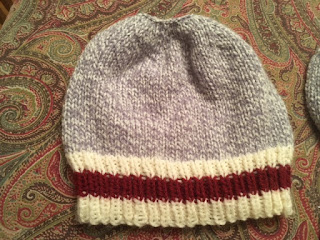 I've been trying to do a fair bit of reading lately and as always, I have more than one on the go at the moment.  As my non-fiction read, I am reading Lest Innocent Blood Be Shed by Philip Hallie.  I read this book years ago and LOVED it.  It is the true story of a small village in France of 3000 people that saved over 5000 Jews during WW2.  They were French Hugenots and pacifists and they showed such incredible courage, all because they believed in the sanctity of human life.  I had ordered this book a few months ago because I loved it so much the first time I read it.  I had been holding off reading it again because I was a bit afraid that it wouldn't be as wonderful to me the second time round.  The first evening, I read the introduction and the first two chapters and had several weepy moments in the best way.  It gives me such faith in the power of goodness to win.  The other book, The Shadow of the Wind, on a very different note, is a book that I discovered from the Modern Mrs. Darcy booklist of books in translation that are worth reading.  It's hard to do the book justice but, as a brief plot synopsis, it is the story of a teenage boy whose father takes him to this place that is a kind of a repository of lost books and allows him to choose one book.  He does, loves it and develops a fascination with the author that leads to somewhat gothic adventures in Barcelona after the Spanish Civil War.  It's good but honestly, I am finding it a bit too long.  I'm also having a problem that I am listening to The Historian on Audible and there are enough similarities in type of book that I keep getting the two confused. 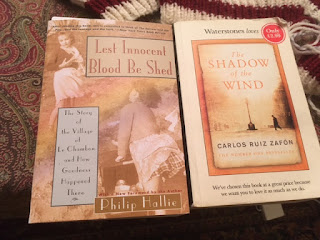 I can't wait to see what other people are reading and knitting these days!